Your Performer Name: ​Singe
Which City are you based out of:​ Bloomington, Indiana. 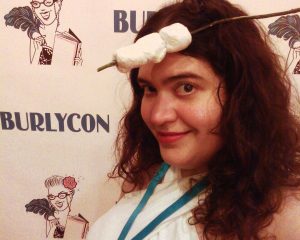 Singe and her smores- ready for the camp fire!
Congratulations on being awarded a BurlyCon Scholarship to attend the convention! It must have been a delightful surprise to receive the notification! On February 1st, BurlyCon will open scholarship applications to attend the 2017 convention and having gone through and being awarded the scholarship yourself, can you reflect back on to the process of submitting the application? Did you find the application simple, overly challenging, a mix of the two?
I almost didn’t submit an application, because I figured there was no way that I’d win it. I mean
really, who’s going to pick Singe from Bloomington, fly-over-Indiana of all places? Yeah I have
hardships, but other people have it harder than I do. But I realized, while it would be disappointing, it
wouldn’t be the worst thing not to win. I would at least have put myself out there, reached outside my
comfort zone & tried. The worst thing would be to accept defeat, by not even bother trying. So I bit the
proverbial bullet and decided that the only way I’d know for sure, would be to give it a shot.
I was nervous that the application would be a nightmare to fill out, but I didn’t find it hard at all! It
was well thought out, asked important & introspective questions, and made me truly question what my
genuine intentions were for wanting to attend BurlyCon.
It was more than just getting to be around shiny things & sparkly people, it was a true desire to
gain more knowledge & experience. To better myself as a performer & as a human being, and to bring
back what I learned to help in my own community here in Bloomington.
Was this your first time attending BurlyCon?
It was! I have been wanting to attend BurlyCon for YEARS, but have never been able to afford
it. But because of the scholarship, I was finally able to get there!
I admit when I got to BurlyCon, I was a little over whelmed. I felt that especially because I had
won a scholarship & that it was my first (and perhaps only) time there, I HAD to do ALL the classes,
lectures, & workshops that I possibly could. I felt that I would be some kind of failure if I didn’t “go! go!
go!” from sun up to sun down. But I realized it wasn’t about doing everything I could, it was about
making the most out of my time at BurlyCon. So I took a step back, cut myself some slack, drank
everything in, and once I found my groove, was able to really enjoy myself & get the most out of my
scholarship by just being myself.
How did you benefit from attending BurlyCon?
I gained so much insight, advice, & knowledge that I have been able to apply in shows as a Stage Madam,
Producer, and MC. It’s been great for my self confidence as a Burlesquer. There have been many times throughout my Burlesque career that I have felt looked down on, or as if I’m someone lesser because my niche is Stage Management, Production or Hosting, rather than stripping. That was absolutely not the case at BurlyCon. Everyone was equal, no matter where their niche lay. Being able to talk to & take classes from people who are known & praised for their skills as MCs and Stage Managers was very inspiring to me. I made some fantastic connections with people from all over the world. It was wonderful to see so many different people from so many different places come together to support & raise each other up, rather than to be catty or tear each other apart. 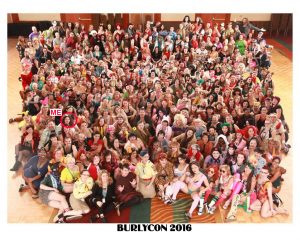 Singe in the annual group photo. The theme for 2016 was ‘Camp’!
Knowing what you know now would you apply again?
Yes, yes, a thousand times YES without any question!
What was the highlight of your BurlyCon experience?
I don’t think I can pick just one highlight out of my experience at burlycon. I had the BEST
roommates in Dainty Dandredge & Sailor St. Claire. We all kept leaving snacks out for each other, and
kept in touch as we went our separate ways through the con. Having such thoughtful & considerate
people to room with made BurlyCon that much better!
The classes that stood out & were the most impactful to me the most, were Armitage Shanks’
MCing class (that has helped me SO much as a Host), Jacqueline Boxx’s class on performing with
physical limitations & Jo Boobs Weldon’s class on glove peeling. The glove peeling class was on the
last day of the con, so it felt very intimate & small despite there being probably over 40 people in the
class. Being able to interact & learn with her was mind blowing & very special.
Lastly, it was wonderful & heartwarming getting to connect with & form bonds with people from
Indiana who had either moved out of state, or who I had only known peripherally. There is a part of the
closing ceremonies where we wrote little notes about what we want from our community & then they
get passed around the room. The note I opened ended up being written by one of my fellow Indiana
Burlesquers, and Indigo Blue tapped me on the shoulder to read it out loud to the entire room. That
was such a moving moment for me, that it brought me to tears.
Anything else that you would like to add?
BurlyCon is an amazing experience, it is INCREDIBLY humbling & gives you a very unique
perspective. It really gives you an up close & personal insight into Burlesque and into our sparkle
community. It is so beautiful to see so many different people coming together to learn & build one
another up. No competition, no rivalries, no politics, or jealousy. Just Burlesquers celebrating
Burlesquers.
So… Put yourself out there & try. That’s all you can do! : )
Now go forth & be the burlesquer you want to see in this world.

Thank you Singe for being apart of the BurlyCon experience. We can’t wait to see you this year!
Interview by Vixen Valentine