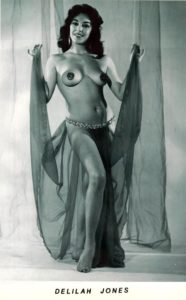 BurlyCon is proud to announce pin-up icon, model, actress and burlesque dancer Delilah
Jones as our 2015 Legend Guest of Honor!

Burlesque Hall of Famer Delilah Jones was born Doris Gohlke in Berlin, during Hitler’s reign. She survived occupied Nazi Germany to become the most photographed pin-up of 1959. She’s been featured in more than 75 magazines, graced more than 25 covers and starred as a centerfold more than 20 times. She acted in film and television, notably in the films The Touchables, Not Tonight Henry, and The Pendulum.

Truly a legend of burlesque history, the incomparable Eartha Quake taught her art of the striptease in L.A., where her ecdysiast persona “Delilah Jones” was born. She worked with legends like Lili St. Cyr, Turana Satana, Candy Barr, and Tempest Storm. She spent most of the next two decades headlining across North America, and finally retired from burlesque in 1980.

Thirty-three years later, she returned to the stage to perform in the Burlesque Hall of Fame Titans of Tease Showcase in 2013. Last year she released her autobiography, My Life Without Regret: From Occupied Nazi Germany to Las Vegas Stripper.

Delilah will be presenting several stellar classes at this year’s BurlyCon, spilling her striptease secrets, sharing her life story, and dispensing the wisdom she’s acquired over a lifetime in show business.

BurlyCon talked with Delilah about coming out of retirement, pin-up posing tips, and advice on how to live a life in burlesque without regret.

BurlyCon is thrilled to have you joining us this year.

I am very thrilled to be part of this year’s festival!

You came out of dance retirement to perform in the Burlesque Hall of Fame Titans of Tease Showcase in 2013. What was it like returning to the stage after 33 years?

My first time back on stage gave me many butterflies in my tummy.

Let’s talk modeling. You were the most photographed pin-up in Hollywood in 1959! What modeling tips and tricks can you share with us so that we can take our best shots?

Do not over act or over-pose, it casts a strain on your face…exhale a few times.

Also in 1959, the legendary Earth Quake (Stacy Farrell) taught you the art of the striptease in L.A.?

Stacey Ferrell spent, on and off, a couple of months with me showing me grace and always to be a sex symbol, how to “strip” with grace.

You spent most the next two decades on the road performing all over North America. What was that like?

Being on the road was so different then. I got an address and a map. The rest was up to me. No cell phone or navigator, just a bag full of change for phone calls! 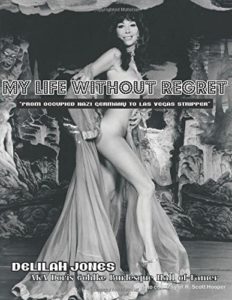 In your autobiography My Life Without Regret: From Occupied Nazi Germany to Las Vegas Stripper, you write about being born during Hitler’s reign in Berlin, and how your home was bombed. You and your family were forced to flee with only the clothes on your backs. How did this experience shape you as a person, and as a performer?

I never looked back, nor dwelled on anything. I do remember one thing – I never wanted to be poor, so I was, and sometimes still am, frugal.

Later on in the 50s, your family joined a nudist club. Did you think your parents were crazy? How did this influence your future career?

I truly believe that I was born a nudist. That is so natural!

You’ve been an all-around superstar – a successful model, actress, burlesque star, and now author. What fabulous projects and performances do you have coming up?

I am writing about my burlesque years with photos, a coffee table book, from the beginning through the years. After that, [I’ll write] one on my pin-up years as a model, also in photos.

My Life Without Regret is the perfect title for the story of your life. What words of wisdom do you have on how to live a life in burlesque with no regrets?

Learn from mistakes, never make them twice, always leave the past behind, tomorrow is beautiful, and don’t do drugs or drink too much!

Delilah’s autobiography My Life Without Regret is available now on Amazon!